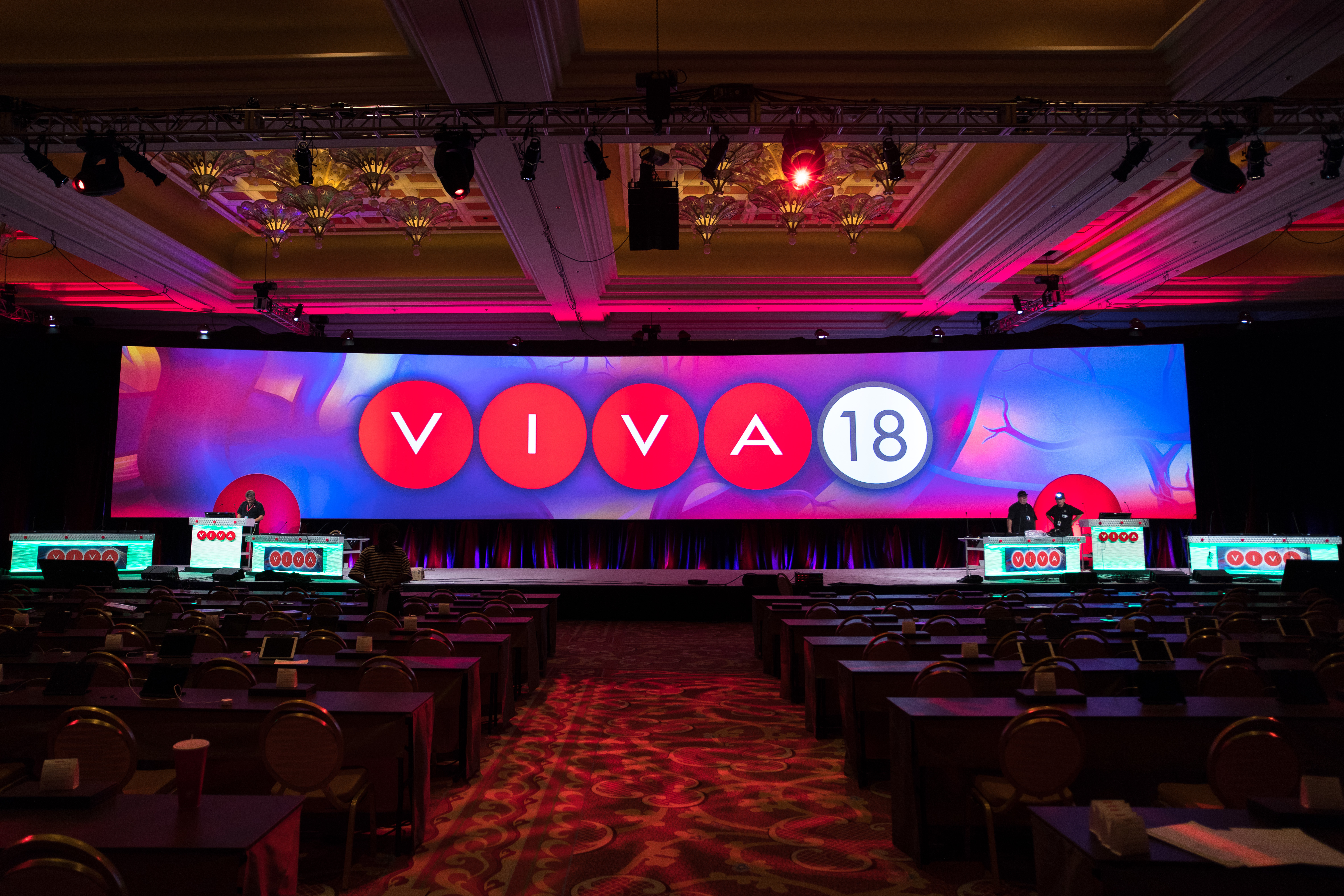 Below are highlights from the first round of late-breaking clinical trial presentations.

The IN.PACT SFA randomized trial demonstrates that the In.Pact Admiral DCB continues to perform better than PTA through 5 years with a higher rate of freedom from CD-TLR and a longer time to first reintervention. The sustained safety and effectiveness profile of this DCB further supports its use as a first-line treatment choice for femoropopliteal lesions.

TOBA II is a prospective, single-arm US and European clinical trial that enrolled 213 patients. Eligibility included Rutherford classification 2 to 4 with de novo or non-stented restenotic target SFA/PPA lesion(s) undergoing standard PTA or drug-coated balloon dilation (Lutonix, BD Interventional). After balloon treatment, lesions with < 30% residual stenosis and presence of ≥ one dissection by angiographic visual estimate were treated with the Tack Endovascular System. The system consists of six preloaded self-expanding nitinol Tack implants on a 6-F catheter. Each implant is 6 mm in length, self-sizes to vessels 2.5 mm to 6 mm in diameter, and uses low radial force to appose dissected tissue against the vessel wall. The 12-month efficacy endpoint of primary patency (freedom from duplex-assessed binary restenosis and clinically driven target lesion revascularization [CD-TLR]) was compared to a performance goal derived from historical outcomes of standard and drug-coated balloons.

In conclusion, the TOBA II trial met its primary endpoints of safety and efficacy in a 100% dissected vessel population. High rates of dissection resolution, patency, and freedom from CD-TLR present Tack as an ideal adjunct to PTA.

The purpose of this trial was to evaluate sex-related differences in the outcomes of the Stellarex drug-coated balloon (DCB, Philips) for the treatment of femoropopliteal arterial disease. A subgroup analysis of the DCB cohort of the Europe and United States ILLUMENATE trial was performed. The study endpoints included primary safety and efficacy at 12 months and were compared between men and women. To identify predictive factors for patency, a multivariable predictor analysis was performed.

There was no significant difference in the 12-month primary patency rate or clinically driven target lesion revascularization rate between men and women. The multivariate analysis demonstrated that reference vessel diameter, lesion length, previous intervention in study limb, severe calcification, and geographic miss were predictors of patency.

Based on this study, despite older age, more comorbidities, and worse vessel and lesion characteristics, women had similar patency outcomes compared to men after treatment with the Stellarex DCB. As a result, further evaluation of the efficacy of DCBs is necessary to understand the disparate nature of the disease progression and to optimize treatment outcomes in women with peripheral artery disease.

The clinical effect of a drug-eluting stent (DES) in the femoropopliteal segment has not been investigated in a randomized trial with a contemporary comparator. The IMPERIAL randomized study sought to compare the safety and efficacy of the polymer-coated, paclitaxel-eluting Eluvia stent (Boston Scientific Corporation) with the polymer-free, paclitaxel-coated Zilver PTX stent (Cook Medical) for the treatment of femoropopliteal artery segment lesions. Results of that trial were recently published and demonstrated superiority of the Eluvia DES over Zilver PTX in lesions of approximately 8 cm in length, with 88.5% patency and 4.5% target lesion revascularization (TLR) rates at 1 year.

In this nonrandomized, single-arm substudy of IMPERIAL, 50 patients with symptomatic lower limb ischemia manifesting as claudication (Rutherford category 2, 3, or 4) with atherosclerotic lesions between 14 cm and 19 cm in length in the native superficial femoral artery or proximal popliteal artery were enrolled and treated with Eluvia. The primary efficacy endpoint was primary patency (defined as a peak systolic velocity ratio ≤ 2.4, without clinically driven TLR or bypass of the target lesion), and the primary safety endpoint was major adverse events (all causes of death through 1 month, major amputation of target limb through 12 months, and TLR through 12 months).

The average lesion length was 16.2 cm, approximately twice as long as the main IMPERIAL trial cohort. No deaths, stent thrombosis, or target limb major amputation were reported in this group. One patient had two stent fractures (2.1% of total stents placed). The primary patency at 1 year was 87.9%, with a TLR rate of 6.5%.

In conclusion, in the long lesion subset of the IMPERIAL trial, the device maintained its safety and efficacy profiles similar to the main IMPERIAL study, demonstrating no decrement in this more complex patient cohort.

This analysis sought to examine clinical safety and efficacy of the In.Pact Admiral drug-coated balloon (DCB, Medtronic) compared to percutaneous balloon angioplasty (PTA) in nearly 2,000 patients pooled from two randomized controlled trials (RCTs) and two prospective single-arm studies conducted at 147 sites across six continents and 28 countries. Patient level data from the IN.PACT SFA RCT, IN.PACT SFA Japan RCT, IN.PACT SFA China prospective, multicenter, single-arm study, and IN.PACT Global real-world, prospective, multicenter, single-arm study were combined. A total of 1,837 patients were treated with In.Pact Admiral DCB and 143 with PTA. The primary efficacy endpoint was clinically driven target lesion revascularization (CD-TLR), primary safety was defined as freedom from device- and procedure-related death through 30 days, and freedom from target limb major amputation and CD-TLR within 12 months as adjudicated by an independent clinical events committee in all studies. Kaplan-Meier estimates were used to assess safety and efficacy at 1 year. A subgroup analysis compared the efficacy of DCB to PTA by retrospectively dividing the subjects meeting standard inclusion/exclusion criteria typical of an investigational device exemption trial into one standard group, and the remaining subjects were assigned to the broader group.

Subjects treated with the In.Pact Admiral DCB in comparison to those treated with PTA had more advanced symptoms per Rutherford category classification and lower ankle-brachial indexes. Furthermore, DCB-treated patients had more occlusions (35.3% vs 16.1%; P < .001) and longer lesion lengths (11.53 cm vs 9.55 cm, P < .001) compared to those who underwent PTA. The 12-month Kaplan-Meier curve demonstrated significantly higher freedom from CD-TLR for the In.Pact Admiral DCB (93.8% vs 80.2%, P < .001). After dividing the patients into the standard and broader use as defined previously, In.Pact Admiral DCB remained clinically superior to PTA in both groups with excellent freedom from CD-TLR.

VIVA Physicians, a not-for-profit organization dedicated to advancing the field of vascular medicine and intervention through education and research, strives to be the premier educator in the field. Our team of specialists in vascular medicine, interventional cardiology, interventional radiology, and vascular surgery is driven by the passion to advance the field for optimal patient care. Educational events presented by VIVA Physicians have a distinct spirit of collegiality attained by synergizing collective talents to promote awareness and innovative therapeutic options for vascular disease worldwide. To learn more about VIVA Physicians, visit www.vivaphysicians.org.